Now, she isn’t. Or rather, she doesn’t have to be. Likewise, Biggles the pilot of Sopwith Camels in the Great War didn’t strike me as being either particularly gay or straight and yet apparently his orientation has been the subject of speculation.

Writing characters is tricky because the author has little control over how they will be percieved. Too much superfluous information and you’re Dan Brown. Too little and you have a blank slate. Or worse, a non-entity.

I’m writing some characters up for my rpg and it struck me that it’s a balance in every case. Do I give an age for characters or let them inhabit a general age group? Do I hint at a “stage of life” through other means? Yes, that might be better. Now I have to figure out what identifies a character’s age without pinning it down. Obviously a grandparent is going to be older and a student will probably be younger. But both words by themselves evoke a wider sense of person than simply their age. What a drama.

So I’ve decided to do it the other way around. Pen portraits are a thing I first encountered in social care when I was a young administrator. It’s a description of a person but often includes context and notes on actions and attitude as well. It’s much easier to observe that a person avoids eye contact or walks with a limp to add flavour to the characterisation. Add a few details about what they hate to eat, or love to do, or whatever to firm up the outline, and you have a character that’s ready to inhabit. 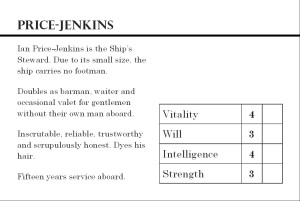 I don’t have a responsibility to define their precise age, hair colour, clothes, sense of style, full personality traits, sexuality, or even skin colour. If I’m sufficiently vague about the things people seem to get really vexed over, players of the game are more than welcome to draw their own conclusions. I’m only the author. The reader needs to fill in the blanks.

After all, I’m not the least bit offended if Hermione isn’t exactly what I expected. Nor Biggles for that matter.

This entry was posted on Friday, January 20th, 2017 at 10:48 AM and is filed under Games, Literature. You can follow any responses to this entry through the RSS 2.0 feed. You can leave a response, or trackback from your own site.

This site uses Akismet to reduce spam. Learn how your comment data is processed.