END_OF_DOCUMENT_TOKEN_TO_BE_REPLACED

I was very unhappy today to hear that local stalwart and all-round good egg Vince is shutting up shop. Truly, Ragnarok has come to Asgard. 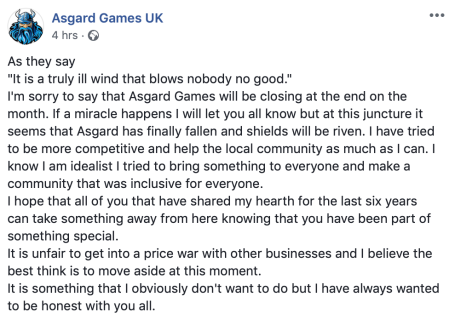 I’m sad to see this day dawn. Asgard and Vince in particular gave me the confidence to launch two successful Kickstarter campaigns and to explore the joy of creating games. My latest game is in development and even has a dwarven theme in honour of the Asgard mascot.

In the outpouring of emotion and support for Asgard, its communities of gamers and wider customer base, it’s important to note a couple of key things.

END_OF_DOCUMENT_TOKEN_TO_BE_REPLACED

A couple of weeks ago I ordered pieces for a game I have recently invented in conjunction with Vince Connolly at Asgard Games in Walsall. END_OF_DOCUMENT_TOKEN_TO_BE_REPLACED

Now, she isn’t. Or rather, she doesn’t have to be. Likewise, Biggles the pilot of Sopwith Camels in the Great War didn’t strike me as being either particularly gay or straight and yet apparently his orientation has been the subject of speculation. END_OF_DOCUMENT_TOKEN_TO_BE_REPLACED

Imagine a world where technology is very different to ours.

And so begins a premise which the average person has probably only glimpsed in silly season news stories about trends in costume wearing comic convention attendees, references to local bookshop Southcart Books or maybe the world of Wild Wild West that terrible star vehicle which nearly ran over Will Smith in 1999 or even The League of Extraordinary Gentlemen (more diesel punk than steampunk apparently, but I’m no judge) that saw Sean Connery’s last screen appearance before retirement. I’ll just leave this here and you can roll your eyes at your leisure.

END_OF_DOCUMENT_TOKEN_TO_BE_REPLACED

Bear in mind the average Kickstarter project might take months or years to set up, run for a month and then take another few months to even get off the ground properly let alone send out all the rewards and so forth. END_OF_DOCUMENT_TOKEN_TO_BE_REPLACED

Nearly all the 60 decks have shipped now. Two to the Antipodes, nearly a dozen to the land of the free and the home of the brave. A familiar chap from my previous Kickstarter in Denmark and a couple of Dutch backers, and the obligatory UK crowd. Over thirty backers in total, ranging from a gent who just wanted a postcard to one backer who ordered four decks.

I’m very happy to say that I had some extra decks from the Kickstarter left, and I’ve put a few in Asgard Games at the standard Kickstarter price of £15. They are the last of the first edition. Get them while they’re in stock!

So it’s come as no surprise that my latest venture has wandered into similar territory. From this week, I’m working with two partners to launch and maintain a kind of co-branding exercise to support our efforts (solo and joint) by providing a unified publishing house. END_OF_DOCUMENT_TOKEN_TO_BE_REPLACED

It’s been a while since I risked every ounce of my professional reputation (nothing) on the roll of No Dice, and I’d been working on a new game in the last few months. Finally I managed to get my stuff together and launch this weekend. What a beginning!

END_OF_DOCUMENT_TOKEN_TO_BE_REPLACED

Writing about Games, Writing Games to Write About

I’m a massive fan of the Metrozone (Petrovitch) series by Simon Morden, and have read a number of his other books. He’s been a speaker at Greenbelt, which was fun to listen to. On the side column of this blog, you can even see the Freezone flag. Click it to find out more.

So, I was delighted to read recently that he’s invented a new game too. END_OF_DOCUMENT_TOKEN_TO_BE_REPLACED