It’s only a couple of weeks old, so it’s probably harsh to try reviewing 2017 already, but I know there are a couple of things coming up I wanted to muse on, so here goes.

So it’s come as no surprise that my latest venture has wandered into similar territory. From this week, I’m working with two partners to launch and maintain a kind of co-branding exercise to support our efforts (solo and joint) by providing a unified publishing house. END_OF_DOCUMENT_TOKEN_TO_BE_REPLACED

No Dice is live!

After fiddling around with the idea for years and spending weeks talking about it, No Dice is finally live on Kickstarter. Do you like card games? Dominoes? Scoring points? No Dice is the game you’re looking for, even if you never heard of it.

The project video is basically just me mumbling at the camera, and the rewards (including T shirts from Eve2 Media) are fairly standard but I’m truly happy with the game itself and welcome everyone on board to get it off the ground.

END_OF_DOCUMENT_TOKEN_TO_BE_REPLACED

I’m almost a published poet. I’ve been added to a collective effort celebrating Walsall wordsmiths in the form of a curated blog.

100 Walsall Poems is now live, and has been for a little while. My effort is included and I’m rather flattered to have been involved. I met the project curator Peace the Poet this afternoon on my walk from the office to the car.

He’s a pleasant chap with a positive disposition, and well known in the borough as a performer and poet.

By all means have a look at the project, and also check out the other things he is doing. It’s all about community and collaboration.

No Dice – a whole new game

For the last couple of years I’ve had an idea rolling around my head based on developing dominoes and adding elements from card games my brothers and I played when we were young(er). It’s essentially a three part domino design on hexagonal cards and a variety of matching rules to score points each turn. I found a supplier who prints custom decks and ordered one to play around with. 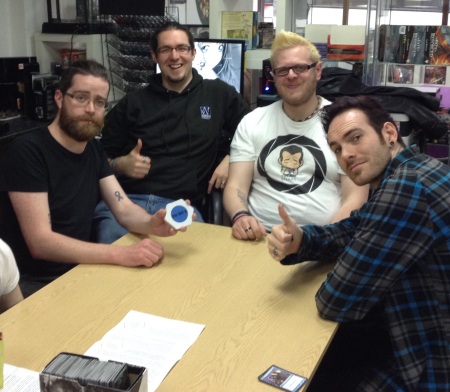 END_OF_DOCUMENT_TOKEN_TO_BE_REPLACED

It’s my 200th post. I’m celebrating by geeking out with an idea I’ve had for a piece of music.

END_OF_DOCUMENT_TOKEN_TO_BE_REPLACED

Yesterday I attended the world premiere of a commission I’d written. END_OF_DOCUMENT_TOKEN_TO_BE_REPLACED